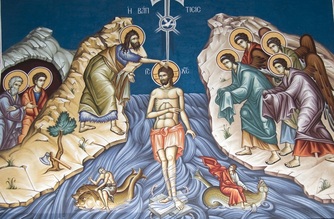 Holy Baptism is one of the four compulsory sacraments of the Orthodox Church which sanctifies and gives strength to the faithful. When one enters the baptismal font they are not only cleansed from sin, but also reborn through God’s Grace. This death and resurrection is real, as they literally die to the old person and are reborn in Christ. The water used in Baptism is salvific water. Once blessed by the Holy Spirit it becomes, as emphasised in the service of Baptism, a fountain of incorruption, a gift of sanctification, a remover of sins and a protection against infirmities.

Christ Himself establishes the sacrament of Baptism in the New Testament. He instructs the Apostles to “Go and make disciples of all nations, baptizing them in the name of the Father and of the Son and of the Holy Spirit” (Matt 28:19). This is a definite and clear command from our Lord to firstly make disciples, which involves catechising those who wish to enter the Christian faith, and secondly to baptise them in the name of the Holy Trinity. Here we have Christ giving us the essence of the sacrament. However, the Church over time, which is guided be the Holy Spirit, has decided on how the sacrament is to be conducted and celebrated.

For the sacrament of Baptism to be complete and valid the following needs to occur:

1) The epiclisis (calling upon) of the Holy Trinity – the Baptism must take place in the name of the Father, Son and Holy Spirit for it to be canonical.

2) Three immersions in water, which symbolises Christ’s three-day burial and resurrection. Through ecclesiastical economy the Church allows for a person to be sprinkled (or even baptised in the air) if they are in danger of dying and are unable to be immersed in water. However, sprinkling water is performed in extremely rare situations and the Church has never made this a general rule as practiced in the Western Church.

3) A canonical bishop/priest performs the Baptism and must not be forced or pressured to conduct the sacrament. In the case of an emergency a deacon can baptise as seen occurring in the New Testament where Philip baptises the eunuch (Acts 8:38). In the instance where there is no priest and the life of a person is in danger, then even a layperson is able to baptise. These types of Baptisms are still recognised by the church as valid and canonical. However, if the person baptised by a layperson recovers and is taken to church, then everything in the sacrament is conducted as normal, except the three immersions.

4) Preparation is required prior to Baptism. In the early Church all who wished to be baptised were catechised first for a number of years. However prior to this, in order to see if they had serious intentions in being baptised, the candidates were first brought to the bishop and asked to answer certain questions regarding their conversion to the Christian faith. Once this was complete, the candidates were considered catechumens and underwent catechism. Infants were excused from this and could still be baptised without having to prepare themselves. Today in the Orthodox Church the catechisms are conducted mainly at the door of the church looking towards the West, symbolising how we are still in the dark and yet to be enlightened. Here the priest asks the candidate (or the godparent if an infant baptism is being conducted) to renounce Satan three times. Then the candidate looks towards the East and is asked three times if they pledge allegiance to Christ. Following this they are asked to confess their faith in the Trinitarian God by reciting the Creed. Once all this is completed then, and only then, does the priest proceed with the sacrament of Baptism.

Finally, we also have the Baptism of martyrdom. In the early church many became martyrs without yet being baptised. These people were still recognised as saints and members of the church since they were considered as being baptised in their own blood. For example, Herod murdered       14 000 infants that were not baptised; however, we still commemorate them as saints seeing as they died martyrs.