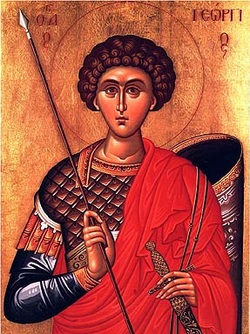 St George is one of the most beloved Saints of our Orthodox Church. St George is called the “Victorious Great Martyr”. He was an officer in the army of the Roman Emperor Diocletian, the great persecutor of the Christians. The Emperor tried in vain to persuade him to renounce Christ but St George refused and remained true to his faith. As a Christian, St George refused to make pagan sacrifice, and he gave up his military commission. For this, and because he was against the cruel persecution of the poor and helpless, he was put to terrible torture. His bravery inspired many Christians to hold fast to the faith and led many pagans to be converted. He was finally beheaded at Nicodemia, a town in Asia Minor on an inlet of the Sea of Marmara, about the year 303 A.D.

The fame of St George spread throughout the Eastern world, and he came to be invoked in time of trouble by Christian and Moslem alike. The Emperor Constantine is said to have dedicated a Church to St George not long after the martyr’s death, and devotion to him soon spread to the West and increased greatly after the Crusaders returned to their homes from the Holy Lands of the East.

St George modelled Christian virtues by his noble conduct towards the poor and the persecuted. The cheerful fortitude of the warrior Saint inspired those who came after him. From the time of Constantine to the Crusades, St George symbolised the struggle against paganism. In later years he became the prototype of the never-ending combat between good and evil, one of the Sons of Light who ever strives to vanquish the ancient Dragon of Darkness. With the passage of time, many legends developed about him. His courage, strength and virtue are a constant inspiration to our community generally and St. George College in particular.

We celebrate the feast day of St George on April 23rd. However if Greek Orthodox Easter is celebrated after the 23rd of April the St George’s day is celebrated on Easter Monday.