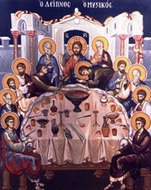 In every other Sacrament we invoke God’s blessings on some material element and ask that it be sanctified. This element could be water, oil, etc. Only in Holy Communion do we invoke God’s blessing upon the material elements of bread and wine and ask God not only to sanctify them, but also to change them. We ask God to change what the bread and the wine are by nature into the body and blood of Jesus Christ.

As a result, when we receive Holy Communion, we receive Jesus Himself into us. So great is this mystery that we are left without any possible response which could express what God has done for us. Therefore we offer the only response we can: thank you. As a word, the term “Eucharist” means thanksgiving.

As well as an act of thanksgiving, the Eucharist is a sacrifice. This can be seen from the text of the Liturgy- Your own from your own we offer You… In other words, at the Eucharist the sacrifice offered is Christ Himself. Christ is also the one who performs the act of offering. He is both victim and priest, both offering and offerer. In the prayer the priest reads before the Great Entrance, he says, “You are the one who offers and the one who is offered…” As well, “we offer to you”- the Eucharist is offered to the Trinity.

The Eucharist is not a bare commemoration nor an imaginary representation of Christ’s sacrifice on the cross, but a true sacrifice itself, yet on the other hand it is not a new sacrifice, nor a repetition of the sacrifice on Golgotha, since the Lamb was sacrificed “once only, for all time.” The events of Christ’s sacrifice- the Incarnation, the last Supper, the Crucifixion, the Resurrection, the Ascension- are not repeated in the Eucharist, but they are made present.

This most divine Sacrament was instituted by Jesus himself at the “last Supper”, on the night of Holy Thursday, just before He was betrayed and then given over to death upon the cross. The Bible relates that during this meal Jesus took bread, blessed it, broke it, and gave it to His disciples and said, “Take, eat, this is my body which is broken on your behalf for the remission of sins.” Then He took the cup with wine in it, gave thanks to the Heavenly Father, and gave to His disciples, saying, “Drink from it, all of you, for this is my blood of the New Testament, which is shed for many for the remission of sins.”

Interestingly the Bible tells us the Last Supper occurred in the “upper room”. Most of the distance between Heaven and earth, in terms of getting us to Heaven, is covered by Jesus Himself. He does however want us to cover a very small proportion of this distance, to rise above the world and its pleasures, above materialism etc.

It is clear that Jesus wanted the Sacrament of the Eucharist to continue for subsequent centuries, until He should come again, for, after he instituted this Sacrament on Holy Thursday, He added the exhortation to His disciples, “Do this in remembrance of Me.” Preserve this Mystery as a continuous and eternal institution for your sanctification and salvation. The Apostles, and those that followed them, obeyed Jesus in this, and have continued this Sacrament up till our times.

For very many centuries now the Eucharist has been celebrated within the Divine Liturgy, usually the Liturgy of St John Chrysostom, and occasionally of St Basil. These two Liturgies probably received their present form in the ninth century. It is probably not the case that they were written exactly as they now stand by the saints whose name they carry. It is quite certain, however, that the Eucharistic prayers of each of these liturgies were formulated as early as the fourth or fifth centuries when these saints lived and worked within the Church.

All Christian traditions enormously respect the Bible, and the Bible supports what we Orthodox believe about the Eucharist. As mentioned above, the Bible reports Jesus saying of the bread, “this is my body”, and of the wine, “this is my blood.” In the Gospel of John, chapter 6, we learn that Jesus exhorts the Jews to believe in Him. The Jews, in turn, ask for proof. The response of Jesus is that He is the bread from Heaven, and He tells them that if they eat of this new bread they will never die. Jesus then went on to explain that this new bread is His flesh!. The Jews clearly understood what Jesus had said, for immediately they questioned, “How can this man give us his flesh to eat?” If Jesus’ words were only symbolic, He could have at that point explained this to them. He, instead, confirms that they had understood correctly, and tells them: “…. unless you eat the flesh of the son of man and drink his blood, you have no life in you”. Those that heard these words understood completely, and John reports that many of Jesus’ followers found these teachings so shocking that they no longer followed Him. If Jesus had been speaking only symbolically, He could have brought back those that left by explaining what He really meant. Instead, in answering those that doubt, Jesus said, “Do you take offense at this? Then what if you were to see the Son of man ascending where He was before?” In other words, why is it so hard to accept that bead and wine can become His body and blood, when, as God, Jesus can do anything, including ascending to where He was before, in Heaven.

There seems to be some difference between the way Orthodox and the Roman Catholic Churches understand the “moment of consecration”- at what moment the miracle occurs. According to medieval Latin theology, the “moment” is the moment the priest reads the Words of Institution- “This is my Body…This is my Blood…”. According to Orthodox theology, there is no one moment of consecration, rather the entire Eucharistic prayer- Thanksgiving, Anamnesis, Epiclesis- all form and integral part of the one act of consecration.

While Orthodoxy has always insisted on the reality of the change- the bread and the wine become in very truth the Body and Blood of Christ, it has never however attempted to explain the manner of the change. It is true that sometimes Orthodox theologians will make use of what came out of Latin scholasticism, the term “transubstantiation” (in Greek μετουσίωσης). Orthodox however generally emphasize that the manner of change is a mystery and must always remain incomprehensible. St John of Damascus put it as follows:

“If you enquire how this happens, it is enough for you to learn that it is through the Holy Spirit…. We know nothing more than this, that the word of God is true, active, and omnipotent, but in its manner of operation unsearchable.”

Very Rev. Dimitri Kokkinos
Priest of The Ressurection of Our Lord - Kogarah (NSW)