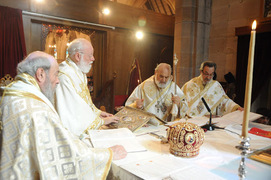 During his ministry Jesus appointed the twelve apostles to continue his Work.

‘And he went up on the mountain and called to him those he himself wanted. And they came to him. Then he appointed twelve, that they might be with him and that he might sent out to preach and to have power to heal the sicknesses and to cast out demons.’ (Mk 3:13-14)

An apostle, being one of the twelve apostles, was therefore someone close to the Lord who was called by Him, sent out (apo-stello) into the world to proclaim the Gospel through preaching, teaching and bearing witness to the Kingdom of God through miracles in the Holy Spirit.

These twelve Jesus sent out, instructing them, “Go nowhere among the Gentiles and enter no town of the Samaritans, but go rather to the lost sheep of the house of Israel. And proclaim as you go, saying, ‘The kingdom of heaven is at hand.’ Heal the sick, raise the dead, cleanse lepers, cast out demons. You received without paying; give without pay. (Mt 10:5-8)

But the apostles were not just disciples of a great Teacher, who were merely sent to convey his teaching to others. Their apostolate also had a sacramental dimension. In other words, the Lord Jesus also conveyed upon them the Holy Spirit, through which the invisible power and authority of his ministry would be forever united to their mission, visibly. As eye witnesses of the Death and Resurrection of Christ they became confessors of the Truth of the Gospel and received the authority to manifest the invisible presence of the Risen Christ in their respective ministries to the world, after Pentecost;

The highest visible action of this Mystery was the authority to preside over the Eucharist (the celebration of the Lord’s Supper in Holy Communion) and to administer membership into the Body of Christ through Baptism, as well as oversee the other Sacraments of the Church.

But, as the generation of the Apostles dies out, the authoritative witness of the Risen Christ, had to be transferred from one generation to another. The Church had to preserve the purity of this witness to the Faith ‘once and for all delivered to the saints’ (Jude 3).

Just as Jesus appointed or ordained his apostles, the apostles in turn ordained their successors through the Sacrament of Ordination. Ordination is a sacrament or of the Church, in that the Church acts through the Holy Spirit, to transfer the apostolic ministry to successive generations.
Candidates were called by the Lord, because they possessed certain spiritual ‘gifts’ of leadership and manner of life that would help strengthen the Church. (1 Tim 3:1-12, C.f. 1 Cor 12:4-11) Their successors were the bishops, presbyters and their assistant’s the deacons, who presided over the Eucharist as the Apostles had done. The sacrament was carried out by the grace of God, through the apostles ‘prayer and the laying on of their hands’ upon the head of a prospective candidate (Acts 1:23-26; 6:6; 13:3; c.f. 2 Tim 1:6-7). Through the laying on of hands, the Holy Spirit descends upon the candidate for Holy Orders, sanctifying him and empowering him to be a shepherd and minister of Christ, to preach and to teach the Word of God, to administer the sacraments and to guide God’s people towards salvation.

These three orders of clergy are called Holy Orders. As its name signifies Holy Orders are the appointment by God to organise the leadership of the Church of Christ.

In the words of St Ignatius of Antioch, who said of the three orders of the clergy that they "have been appointed according to the mind of Jesus Christ, which (clergy) He has established in security, after His own will, and by His Holy Spirit." (Ign. Phil. sal.; also Eph. 3:6; Phil. 4.)

The Greek word for bishop (episkopos) means ‘overseer’. The Holy Orders are a calling to ‘oversee’ the teaching and sacramental presence of Christ in the Church. The Bishop is seen as the father of the Local Church – the Shepherd who manifests the place of Christ in the Church, and carries in his ministry the doctrinal and sacramental fullness of the Gospel. St Ignatius again taught that the local unity of Christians in Christ is clearly and visibly imaged by unity in the person, or office, of the bishop. Unity in the bishop is a living image of unity in Christ.

"It is manifest, therefore, that we should look upon the bishop even as we would upon the Lord Himself." (Ign. Eph. 6.) "... take heed to do all things in the harmony of God with the bishop presiding in the place of God." (Mag. 6) " For when you are subject to the bishop as to Jesus Christ you appear to me to live not after the manner of men but according to Jesus Christ... " (Tral. 2.) "... let all reverence ... the bishop as Jesus Christ." (Ibid. 3.) "Wherever Jesus Christ is, there is the Catholic Church." (Smyr. 8.)

As Church membership increased, various needs of the laity (the un-ordained faithful) had to be met, in addition to teaching, such as overseeing the church locally and philanthropic work. Bishops and/or presbyters (i.e. priests) were in-turn appointed in cities and towns were the apostles had preached and planted churches. This is seen in the Apostle Paul’s ordination of the Presbyter/Bishop Timothy to the city of Ephesus;

‘Let no one despise you for your youth, but set the believers an example in speech, in conduct, in love, in faith, in purity. Until I come, devote yourself to the public reading of Scripture, to exhortation, to teaching. Do not neglect the gift you have, which was given you by prophecy when the council of elders laid their hands on you. Practice these things, immerse yourself in them, so that all may see your progress. Keep a close watch on yourself and on the teaching. Persist in this, for by so doing you will save both yourself and your hearers.’ (1 Tim 4:12-16)

The philanthropic ministry and the assisting of the bishop/presbyter in the Divine Liturgy was entrusted to the deacons who were specifically ordained for this ministry. (The deacon cannot preside over the Eucharist in the absence of the bishop or presbyter). In the Acts of the Apostles, we have a record of the appointment of the first seven deacons in the primitive Church.

‘Now in these days when the disciples were increasing in number, a complaint by the Hellenists arose against the Hebrews because their widows were being neglected in the daily distribution. And the twelve summoned the full number of the disciples and said, “It is not right that we should give up preaching the word of God to serve tables. Therefore, brothers, pick out from among you seven men of good repute, full of the Spirit and of wisdom, whom we will appoint to this duty. But we will devote ourselves to prayer and to the ministry of the word.” And what they said pleased the whole gathering, and they chose Stephen, a man full of faith and of the Holy Spirit, and Philip, and Prochorus, and Nicanor, and Timon, and Parmenas, and Nicolaus, a proselyte of Antioch. These they set before the apostles, and they prayed and laid their hands on them.’ (Acts 6:1-6)

It is also clear from the above that ordination was not an isolated affair, conducted by the clergy alone, but was indeed an action of the whole Church, as the Body of Christ, through the prayer and affirmation of the whole People of God. And so ordination occurs today, in all three orders, as it did in the beginning, not as a private appointment, but as an action performed in the Divine Liturgy, and affirmed when the whole People of God proclaim ‘Axios!’ (His is worthy!) at the end of the ordination. Even a bishop must be ordained with the assent and laying of hands of a ‘college’ of three or at least two other bishops.

The fact that the apostles kept ordaining others to carry on their work, is amply testified in Scripture and in the writings of Church fathers such as Eusebius of Caesarea. Eusebius for example spoke of St Polycarp who became bishop of the great ancient city of Smyrna as having been ordained by the Apostles;

‘Pre-eminent at the that time in Asia was a companion of the apostles, Polycarp, on whom the eye-witnesses and ministers of the Lord had conferred the episcopate of the church at Smyrna.’ (Eus; History of the Church 3, 36)

This, Eusebius claimed, guaranteed the ‘orthodoxy’ and purity of the Christian Faith as it had been received from the Apostles. In later years, other bishops like St Iereneus who was bishop of Lyons in Gaul in the late second century, would claim the validity of his priesthood, against false teachers, through tracing it back through his master St Polycarp of Smyrna. Polycarp had been ordained by St John the Evangelist.

This is called Apostolic Succession. The fact that every Orthodox Priest, Bishop and Deacon in the present day, can trace back their priesthood to the Apostles through Apostolic Succession, is a great testimony to the one and undivided Church of Christ that has always existed since apostolic times and that it is truly ‘One, Holy Catholic and Apostolic’.

While other churches that claim to be Christian also claim apostolic succession for their respective ‘clergy’, it is an undeniable fact that historically, the Eastern Orthodox Church (and to some degree, the Roman Catholic and Oriental Orthodox Churches) claim an unbroken connection with the apostolic era.